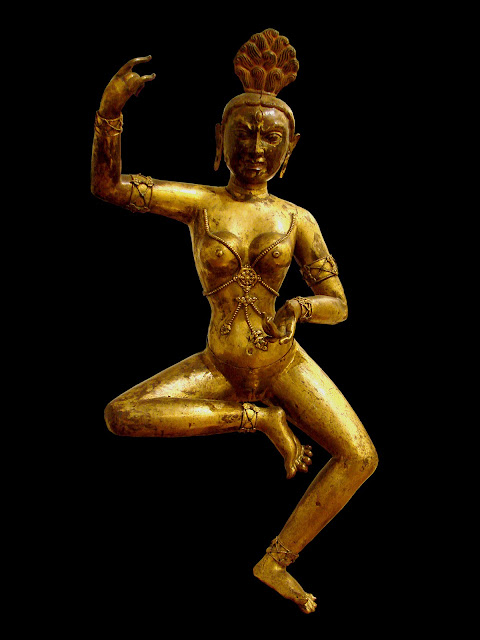 The evocation of flight in both physical and spiritual space as one of the powers of Awon Iya wa,Our Mothers,the Aje,exemplars of the creative and destructive spiritual powers of women, could be correlated with ideas of cognitive flight developed by the Olorisa-Orisa devotee-Susan Wenger,who is influenced by Tibetan Buddhism, in relation to her art,to her relationship with nature as well as with the construction of oracular insight in relation to Ifa. These correlations amplify the relationships of endogenous Yoruba conceptions of the feminine with other cultures.

Wenger transmutes the idea of flight in terms of the flight of consciousness, where the spiritual space the witch is understood to traverse through her avian powers is accessed through an immersion in nature and its occult properties:

Here I am,one with the water;I think and feel like the river,my blood flows like the river,to the rhythm of its waves,otherwise the trees and the animals wouldn't be such allies.I am here in the trees,in the river,in my creative phase not only when I am here physically, but forever-even when I happen to be travelling-hidden beyond time and suffering,in the Spiritual Entities, which,because they are Real in many ways,present ever new features. I feel sheltered with them-in them-because I am so very fond of trees and running water-and all the gods of the world are trees and animals long,long before they entrust their sacrosanct magnificence to a human figure.
(Adunni:A Potrait of Susan Wenger by Ralph Brockman and Gerd Hotter.

The image of flight, as expressed in the iconography of birds in flight, evocative of flight in terrestrial as well as in spiritual realms, is also associated with Ifa, as expressive of the oracle’s power to demonstrate a comprehensive grasp achieved through cognition across terrestrial and spiritual dimensions of being, of the queries presented to it . In correlating the image of the bird, as a biological form that is yet expressive of extra-biological powers, with the powers of oracular insight of the prestigious Ifa oracle, Ifa iconography underlines the construction of the feminine in relation to exoteric and esoteric powers in traditional Yoruba thought.
Posted by Oluwatoyin Vincent Adepoju at 18:12