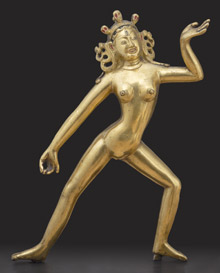 Iconographic representations tend to show the dakini as a young, naked figure in a dancing posture, often holding a skull cup filled with menstrual blood or the elixir of life in one hand, and a curved knife in the other. She may wear a garland of human skulls, with a trident staff leaning against her shoulder. Her hair is usually wild and hanging down her back, and her face often wrathful in expression, as she dances on top of a corpse, which represents her complete mastery over ego and ignorance. Practitioners often claim to hear the clacking of her bone adornments as the dakinis indulge in their vigorous movement. Indeed these unrestrained damsels appear to revel in freedom of every kind.

It is said that the Dakinis have the power to instantly entrap mere mortals with their gaze. The mirror of your mind is the mysterious home of the Dakini - your right brain - your feminine side. The secret Dakinis guard the deeper mysteries of the self. Representing upsurging inspiration and non-conceptual understanding, Dakinis invite you to cut free of all limitations. They are unconventional, unexpected, spontaneous, dancing in great bliss, at one with divine truth. In the eastern tradition, a cycle of 64 Dakinis/Yoginis represents a complete cosmogram for the transformation of the self, embodying the total energy cycle of creation as depicted by the dance of Gnosis, the wisdom and energy of the divine feminine. In representing this complete cycle we have the opportunity of evoking not only the Goddess, but of manifesting the totality of the Great Goddess herself.

Yogini/Dakini temples flourished in India around the 9th through the 12th centuries. Erected in remote places, especially on hilltops, the temples were circular enclosures open to the sky. Around the inner circumference were 64 niches which housed exquisite stone carvings representing various aspects of the Goddess energy, creating a circular mandala around a central image of Shiva, symbol of Cosmic Consciousness and the one-pointedness of yogic discipline.