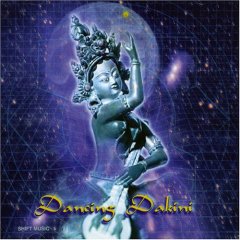 The term Dakini is Sanskrit. It's Tibetan equivalent is Khadro, kha meaning sky and dro meaning to go. Taking it together, Khadro means one who can move through the sky.

...dakinis as the principle of wisdom as the root of all Buddha Activity.

In the symbolism of the feminine aspect of a dakini, the ultimate dakini embodies the inseperability of emptiness and wisdom. Only when that dakini takes form in the Five Buddha Families does she represent the differing patterns of experience that are the mental and physical constituents making up human personality.

The Five Buddha Families are the five aspects of a total situation from five different angles. Seeing the universe in these different arrangements is a way the Buddha families are used to transform relative states of consciousness into the understanding of the ultimate mind. In their neurotic expression the Buddha Families are styles of imprisonment. In their enlightened expression they are styles of freedom. A particular neurosis of each family is associated with a particular type of wisdom or enlightened form it can be transmuted into.

All these qualities relate with each other, all of our experiences are colored by these five energies,and have their basis quality as completely vast space. This space (or Akasha) is [a]medium for movement.

To live as a dakini means to be aware of this space. This is the true meaning of a dakini as [a] being one who can move through space. It is a space behind the poisons and thought patterns. Such an awareness, however, is hard to maintain. Our mind is totally unstable and most of us have no real control of it. It flutters from one thing to another. Recognizing and training the mind is the only way to gain stability. If we really had stability, we could maintain recognition of our mind's essence in dharmakaya on a continual basis no matter what was presented to us through our emotions or thoughts.

Yogic practices purify both the male and female principles within the human body. It is through a practice that seeds of the vital force of the five senses, the male aspect represented by the Five Buddhas and the forces of wisdom, the female aspect of the Buddha Nature represented by their Five Consorts are purified. It is through the path of Vajrayana that one is able to attain enlightenment in just one lifetime by making full use of the very poisons and illusions that cause delusion.

Now, sentient beings are constantly operating from these grounds of these Five Buddha Families and manifesting in it's natural manner in any given situation the energies present within themselves with a reference point that can either be confused or enlightened. There are polarities and pulls of all kinds occuring in a pattern. A basic force that relates to this basic patterning is a kind of clarity. It is a space where the two polarities can exist and maintain themselves. This space is a totally awake situation where emotions and thoughts can arise but from an unconditional quality. If we can realize this very fact when our emotions are happening, we can instead of being caught up in the emotion or thought can release it in the midst of this space instead and it will dissolve into its true nature of clarity.


Vajrayana Buddhism uses different methods for developing the mind. In the Development Stage of practice, for example, one imagines an outer world that is perfect in every way, a Buddhafield. With everything in the world being made up of the five elements, visualizing our outer world as a Buddhafield allows us to regard the body, speech and mind in its pure form. In a Completion Stage the wisdom aspect of the Buddha Nature itself is recognized. One of the taming processes used in Vajrayana Buddhism is Samatha and Vipasyana meditation. It is beneficial because the mind must be held down and not left to it's own devices where in it's own natural way it likes to get involved in anger and aversion and other bad things. Such things like this is what the mind is used to and it is with real training and effort, such as through Samatha and Vipasyana meditation, that one can amend the habits of one's mind.

Dakinis can transform energy directly through experiences and for this reason it is the dakini who is associated with Tantric teachings and working with the energies of the body, speech and mind. Meditation on a dakini such as Vajrayogini or the Five Buddha Family Wisdom Dakinis is one way of establishing awareness of dakini energy in all its forms.

Buddha's transcendent qualities are active principles with one type of energy not being separate from all of the other energies. This is the key point. While ego naturally evolves because of its psychologic components, if one is able to dissolves the projections of the mind, one can replace it with the five factors of enlightenment. Thus, if one depends on the Dakinis one can move toward transforming one's mind through the experiences one comes across in one's life.