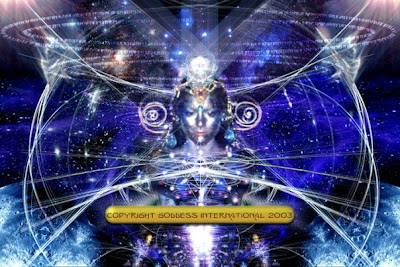 Last Thursday I slept outdoors in my backyard. Just me, the ultra-thin backpacking Thermarest, and a down sleeping bag. I was looking forward to the moon but it was not to be. The pregnant nearly full moon and distant stars were totally obscured. It ended up being just us and the black velvet sky.

I am tempted to tell you, tempted to hint at what I discovered contemplating the open sky. But I don't want to deprive you of the real authentic experience of quenching your own hunger rather than living vicariously through a description of my feasts.

In describing a meditation where the focus is upon an enlightened sky dancer, a dakini (female buddhas said to be "clothed in sky"), a "hollow body" meditation is described as:

Dakini "One pays special attention to her empty yet apparent body. As we saw in the last chapter, the yidam [female deity] has shape and form but is insubstantial, like a rainbow, the play of light, or a drawing in space. One visualizes that there is nothing solid inside that body: one could pass one's hand through it. This is who - or what - we essentially are, once our belief in our solid self is removed." - Secret of the Vajra World: The Tantric Buddhism of Tibet, by Reginald Ray

Bonus: My inspiration for the Thursday tryst with sky. Try this at home: "The Vijnanabhairava Tantra enumerates a number of practices... One of the favorite occupations of yoginis and yogis consists of watching the sky, which has a mindlike nature, until the moment wherein union with space takes place. I spent nights shivering, lying on the freezing ground, my body completely abandoned, often at the end of an outlandish race through the woods with Devi. This meditation can be practiced at dawn, at twilight, or in the middle of the night. Abandoned to the stars." - from the most mind-blowing book I've read this century, by Daniel Odier

p.s. There is indeed a method to my madness and apparent obsession with desire. "You are what your deepest desire is." - The Bhavagad-Gita. "The path of mahasukha ("great bliss") is a way of speaking about the Vajrayana in which liberation is attained by means of experiencing the "pleasure" of the five senses." - Secret of the Vajra World: The Tantric Buddhism of Tibet, by Reginald Ray.

This post: Fifth Avenue Sky Dancers on June 12 2006 at http://evelynrodriguez.typepad.com/crossroads_dispatches/2006/06/fifth_avenue_sk.html
Posted by Oluwatoyin Vincent Adepoju at 18:39