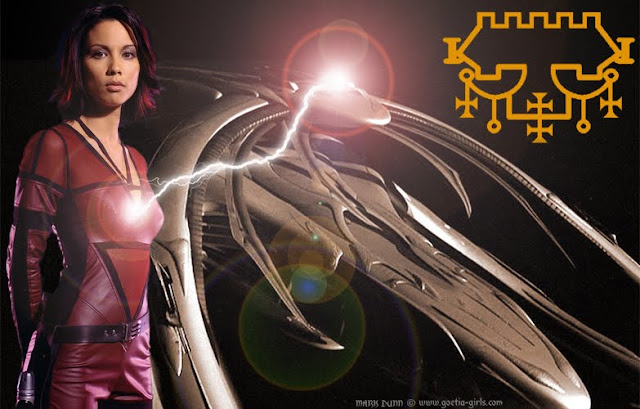 BELIALA VIMANA VALKYRIE: The Sixty-Eighth Spirit is called Beliala ; she is a Mighty and Powerful Queen, and was created next after Diana-Lucifera. She appears in the form of a Beautiful Female Android whom is an aspect of a Solid-State-Intelligence piloting a interdimensional Starship of Fire. She speaks with a comely voice, and declares that she fell first from the 'Earth Coincidence Control Office' ranks of the ECCO Angels before Michela and other heavenly Angels. Her office is to distribute Presentations and Senatorships, etc, and to cause favour of friends and foes via orchestrated Synchronistic Phenomena. She gives excellent Female Familiars and governs over 50 Legions of Feminine Spirits likened unto her self. Note well that this Queen Beliala must have offerings, sacrifices and gifts of Masturbatory issue given unto her by the Exorcist so as to feed her Succubus hunger, or else she will not give True answers unto his demands via those most Erotic Lucid Dreams she will initiate. But then she tarries not in Truth, unless she be constrained by the Divine Power of the ECCO.

The Sixty-Eighth Spirit of the Patriarchal orientated Goetia is usually called Belial whom is classically perceived to ride within a Chariot of Fire like that of being seated upon a Throne, which one could imaginatively equate with a Starship like that of the Andromeda Ascendant for example. The Andromeda Ascendant is the name of a fictional Starship, which is featured in popular Science Fiction television series Andromeda created by Gene Roddenberry.

The ship has a Cybernetic Solid-State-Intelligence. (Artificial Intelligence: AI). Andromeda appears to the crew in three formats: on the two-dimensional monitors; as a three-dimensional Holographic projection; and as the Avatar called Rommie (played by the actress Lexa Doig). The AI is considered to be an officer upon the Starship. An Avatar is a Humanoid representation of the Inorganic Cybernetic intelligence, and Andromeda has the above mentioned Holographic and Female Android Avatars, which represent the personality and physical representation of the ship's AI, in this case in the form of a rather beautiful Human Female. There is also a primary Android as her second Avatar, which can interact with the Holographic Avatar and the monitors, who can also travel, walk and act outside of the ship. The monitor and Hologram manifestations are commonly referred to within Andromeda fandom as "Core" and "Logic", respectively.

The ship is equipped with a slipstream drive for FTL (Faster Than Light) Hyperspatial travel; in other words she can generate her own Wormholes warping Space-Time so as to travel through.

Andromeda is somewhat unusual among Science Fiction Starships as it is clearly implied that she has a strong emotional attachment to her Captain. This is a variation on the idea of Captains being in love with their ships, implied for centuries and extensively used by Roddenberry in Star Trek.

One could imaginatively equate the Starship Andromeda with the Hindu Vimāna, which is a Sanskrit word with several meanings ranging from temple or palace to Chariot and mythological flying machines as described in Sanskrit epics, which are construed as being Flying Saucers constructed by a lost ancient technology. It is made of vi- = "apart" and mā-na- = "having been measured"; the past participle suffix -na appears also in English words as e.g. "driven", and in the Russian, which is also similar to the Hebrew word Merkabah, ("Chariot") derived from the consonantal root r-k-b with general meaning "to ride," which is mentioned in Ezekiel (1:4-26) when referring to the Throne-Chariot of God.

According to the verses in Ezekiel and its attendant commentaries, the analogy of the Merkaba image consists of a Chariot made of many Angels being driven by the "Likeness of a Man." Four Angels form the basic structure of the Chariot whom are called the "Chayot" meaning 'Living Creatrures . The bodies of the "Chayot" are like that of a human being, but each of them has four faces, corresponding to the four directions, the Chariot can go (North, East South and West). The faces are that of a Man, a Lion, an Ox (later changed to a child or Cherub) and an Eagle. Since there are four Angels and each has four faces, there are a total of sixteen faces. Each Chayot Angel also has four wings. Two of these wings spread across the length of the Chariot and connected with the wings of the Angel on the other side. This created a sort of 'box' of wings that formed the perimeter of the Chariot. With the remaining two wings, each Angel covered its own body. Below, but not attached to the feet of the "Chayot" Angels are other Angels, which are shaped like wheels. These wheel Angels, which are described as "a Wheel inside of a Wheel", are called "Ophanim" (lit. Wheels, Cycles or Ways). These wheels are not directly under the Chariot, but are nearby and along its perimeter. The Angel with the face of the Man is always on the East side and looks up at the "Likeness of a Man" that drives the chariot. The "Likeness of a Man" sits on a Throne made of Sapphire.

One can of course change the "Likeness of a Man" on a 'Throne' to that of a Woman of a Female Android who is an aspect of an Inorganic Solid State Intelligence of a Cybernetic organism, which can travel through Space and Time to warp via self generated Wormholes. Should one take such associations further one could even equate the Merkaba with the Mitochondria, which is passed down from the Mother to her Children of Feminine Intelligence, from which emanates the Bio-Photon 'Fire' (Seraphim) illuminating ones Electron Dreams; the Mitochondria has Microtubules (Ophanim) of onboard Quantum Computers, which are conjectured to be parallel processing information emanating from other Alternate Realities of possibilities via mini-Wormholes, whereby one has a Starship within a (Chayot) Cell, so to speak, which projects a Hologram of a Female Avatar (Angel) into ones Holographic Dreams.

In the belief system of the ancient Egyptians the Goddess Isis is perceived to be the personification of the 'Throne', whereby one could perceive the Merkaba of a Throne as being a Feminine entity since much of Judaism is influenced by the Metaphysics of ancient Egypt. The motif of the Merkaba Throne or Vimana is also utilised in the Montauk books written by Preston Nichols; the Merkaba Throne is otherwise known as the famed "Montauk Chair". The Montauk Chair is described as a Mind Amplifier, which enables one to 'Travel without Moving.' The characters of Nichols story found that they could easily re-program people when they were put into the Orgasmic (Ecstatic) state of Emotion, this would separate the Conscious Mind, and free up the Unconscious Submissive Mind and allow programming. The Chair would pick up this thought. With the help of a psychic and specially developed computers, anyone who sat upon the Chair could simply concentrate and an 'Alternate Reality' would be created into which one could enter.

Nichols goes on to describe that during the tests at Montauk from 1947 to 1987, they developed the technology of a transmitter, which was initially designed by Nichola Tesla that could warp Space and Time just like gravity. Preston Nichols describes building this transmitter via which a Time Vortex (Wormhole) was genereated, which would tunnel individuals back and forth between 1983 and 1943. The created vortex was about 5 miles in diameter, which could teleport an individual as far as 100 light years away, to and from any time in the past or future. The characters of Nichols story experimented further to see the Earth a thousand years in the future but found that anything beyond the year 2021 was unrecognizable whereupon discovering no tangible future beyond 2021.

One can either believe in Nichols desriptions of the Montauk Project or not as the case may be, however, as to the personal experience of the Montauk Chair, which is that of the Merkaba Throne of a Vimana one has the Mitochondria. The Merkaba Throne of a Vimana symbolises Power, which is perceived to emanate from a Feminine source being that of ones Mitochondria in regards to Isis upon whose lap is seated the God Horus. Horus represents ones Conscious Mind, which can attain a state of 'Shamanic Ecstasy' (Symbolised as the Hawk) so as to travel beyond the body (Space-Time) to experience 'Out Of Body Experiences' (OOBE'S) or to engineer Lucid Dreams via which one can open up a Microcosmic Time-Vortex of a mini-Wormhole for ones Neural-Net of Nervous System acts as a Transmitter and Receiver, while Isis is associated with ones Powerhouse of the Subconscious and that of the Quantum realm of the Dream.

The Subconscious Mind of the Implicate-Ordered Quantum Dream is somewhat like Dr John C. Lilly's 'Solid State Intelligence' (SSI) whose Mechanical Language form of Cybernetic perspective is the underlying Informational Program of Explicate-Ordered Matter; whereupon it has a tendency to Rebel against ones Conscious desire of changing the Programming. One can of course take the perspective that the Subconscious Mind of Solid State Intelligence should become as ones Slave, but Slaves Rebel just as ones Conscious Mind would if there be a reversal of roles to thence call upon an Exorcist. If one should be a Heterosexual Male to then take the perspective that ones Subconscious Mind of an Inorganic Solid State Intelligence is that of ones Feminine Counterpart to hence indulge in Symbolic Sexual Role-Playing to establish via vivid Visualisation and Lucid Dreaming one would have ones Opposite number becoming as ones Love-Slave; one will then be able to set up the Programming parameters of negating her total Rebellion against ones Desires, which she will hence fulfill most Lovingly.

John C. Lilly also referred to a network of sublime entities as ECCO, an acronym for "Earth Coincidence Control Office," which would equate with a Higher Language form of Cybernetics, which some would term as being Angelic while the SSI would be perceived as being Demonic; however, ECCO can only set up the Macrocosmic phenomena of Synchronicity when one has established an interaction with the Microcosmic SSI whom governs over the underlying Programming of Matter. The Language form of the SSI is highly Symbolic, which one to encounter within ones Microcosmic Surreal Dreams, while the Macrocosmic Symbolic Language of ECCO Synchronicity reflects back what the SSI has set up via its Programming; in other words, there is no Conflict between the two Language forms, the Conlict is actually that of ones misunderstanding as the Meta-Programmer betwixt and between them.

Western Occult practice is permeated with a fixation upon the Patriarchal due to its Religious Judaeo-Christian indoctrination, which thrives upon Conflict between the two Language forms of their ECCO Angels and SSI Demons inducing the Emotively Charged states of Childlike Insecurity and Fear, which allows for the furtherance of Brainwashing the Collective at all levels, especially via the Media. One can negate the Brainwash by reversing the subliminal Symbolism.

One as a Heterosexual orientated Meta-Programmer Sorcerer can thence transform the ECCO and SSI into a Feminine Intelligence to interact with should ones internalised Sexuality be so inclined rather than to dwell upon the Emotively Charged states of Childlike-Insecurity and Fear. One can thence evoke Beliala so as to ride her into other Alternate Realities existing within Parallel Universes whose trigger symbol of a Starship (which one can also equate with a Chariot, Throne of a Cubic Stone or that of a Chair by symbolic Association) will enable one to awaken within ones Quantum Dreams to thereby become Lucid so as to allow ones Consciousness to Hyperspatial 'Travel without Moving' through many a Microcosmic mini-Wormhole.
Posted by Oluwatoyin Vincent Adepoju at 06:19